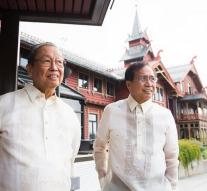 oslo - Negotiators from the Philippine government and communist rebels in the island state on Monday in high spirits began peace talks in Oslo. The two camps met in a hotel room that is dedicated to the winners of the Nobel Peace Prize.

The six-member delegations of the government and the rebels shook hands, smiled and made victory signs. The founder of the Philippine Communist Party (PKP), Jose Maria Sison, once praised the generosity of President Rodrigo Duterte. The president pulled the peace process smoothly through the release of rebel leaders and the proclamation of a file.

Sison lives in the Netherlands in exile since 1987. Friday freed two leaders of the rebels do after Oslo also Netherlands, but then travel in their own words to their homeland. Benito and Wilma Tiamzon hope they have to fear no longer end up behind bars.


The government hopes to bring the peace negotiations to a successful conclusion within a year. That is a tough one. In the past it was considered repeatedly piece,, revolutionary 'demands of the rebels, including the nationalization of major industries and land redistribution.

The rebels are more reserved. However, they have already announced to extend the truce if the first round of consultations this week goes well.

The struggle of communist rebels against the government in Manila drags himself since the sixties on. The guerrillas took so far about 150. 000 people died. Norway mediates between the gamecocks and has hosted the peace talks.