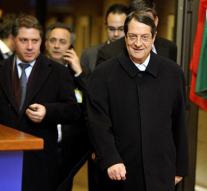 - The peace talks on Cyprus has entered a decisive phase. A peace agreement still depends on a few critical issues, is to learn from circles around the Cypriot government.

Cypriot President Nikos Anastasiades, leader of the Greek Cypriots and the Turkish Cypriot leader Mustafa the next three weeks, talk to each other several times to smooth out the final creases. Easy is not, because the agenda has a number of hot issues.

So Akinci insists that Turkish troops remain stationed on the island to protect the rights of Turkish Cypriots. For Anastasiades is taboo. Also, both sides still disagree about what should happen to the Turks that since the Turkish army in 1974 northern Turkish-occupied have settled on the island.

Cyprus is divided into Turkish and Greek part independently since Turkey in the northern half of the island is the independent state of Turkish Cyprus proclaimed.