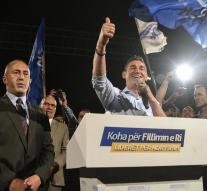 According to the exit polls, the Democratic League of Kosovo (LDK) reached almost 26 percent of the votes, like the Self-determination Party. To get a stable government, the PDK will have to find a coalition partner.

It is the third time that elections are held since Kosovo declared independence in Serbia in 2008.