Home / World / Pastor from USA before the judge in Turkey 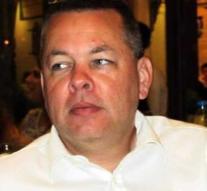 ankara - The American preacher who is stuck in Turkey denies that he has been involved in illegal activities. 'I would never do anything to harm Turkey. I love Turkey, 'said Andrew Brunson during the trial in Aliaga. The court decided to extend his detention on Monday until at least the next session on 7 May, reports the Turkish news channel NTV.

The authorities accuse the clergy of collaborating with banned organizations. According to the complaint, which was read by Reuters news agency, among others, the PKK and the organization of Fethullah Gülen, who is held responsible by Turkey for the failed coup in 2016. The preacher can get up to 35 years in prison.

Brunson, originally from North Carolina, has lived in Turkey for more than twenty years. The authorities arrested him about a year and a half ago. The case has put the relationship between Washington and Ankara under further pressure. The American senator Thom Tillis and the American envoy for Religious Freedom, Sam Brownback, were present at the session on Monday.