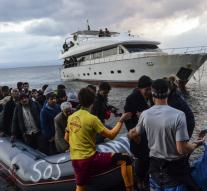 - On the Greek island of Lesbos have been arrested in recent days twelve people. They are suspected of forging passports for refugees. According to Greek media, eight Pakistanis and three Greeks among those arrested.

Raids are false passports, stamps, 23 mobile phones and found in 1500 euro in cash.