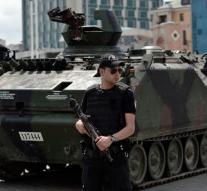 - The annual leave for Turkish officials have been suspended indefinitely. That the government has decided. The decision applies to more than three million Turks.

Officials already are considered holidays to return as soon as possible. The decision was announced Monday in the state newspaper.

Since the failed coup last week are already lots of people purged from the state apparatus. The police, the army and the judiciary are thousands of people sacked.