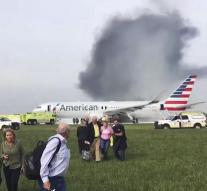 - Twenty passenger's Friday (local time) slightly injured when she was a plane that had caught fire on the runway at O'Hare airport in Chicago had to leave in a hurry.

The pilot had to brake when the run before starting an engine exploded. On board the Boeing 767 of American Airlines, which was on its way to Miami, there were 161 passengers and nine crew members. was on amateur video on the Internet to see thick clouds of smoke ascended while the passengers exited the unit via the emergency slides. The injured passengers were mainly sustained bruises.