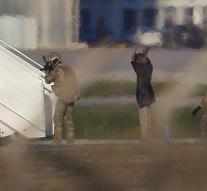 tripoli - The 111 passengers on the plane that was hijacked on Friday and had to fly to Malta, are brought to the Libyan capital Tripoli, the original destination of the flight. Reported that the Libyan state news agency Lana Saturday.

Two men forced the crew of the aircraft Afriqiyah Airways-fly on a domestic flight in Libya to Malta. There were hours of negotiations and the two hijackers let go all passengers and surrendered himself.

The Maltese Prime Minister Joseph Muscat hijackers had no demands. However, the supporters of the ousted and killed dictator Muammar Gaddafi appeared because they showed a fluttering Libyan flag of his time.