Home / World / Passenger tied up at the rear of the van 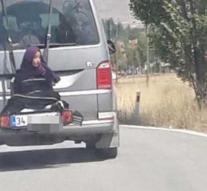 - The Turkish driver of a van is stopped by the police. Bizarre images went viral showing that a woman is tied to the back of the car.

The video is one of the most watched videos on Turkish social media last week. The car with the tied woman is from Istanbul, and was captured by another car driver. This is how the Turkish newspaper Hurriyet Daily News reports.

Idris K. has been arrested by the Turkish authorities and is stuck. It is not clear why the woman was tied to the vehicle. Also the relationship that the driver has with the woman is not explained.