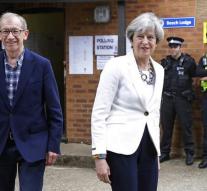 london - The Conservatives of British Prime Minister Theresa May continue on their biggest rival in the last poll. The party can count on 44 percent of the votes, published by the London Evening Standard newspaper, published by Ipsos MORI on Thursday.

The 'Tories' see their lead at the Labor Party of Jeremy Corbyn in the poll to grow to 8 percent. Although the May party yields one percentage point compared with the previous poll, less respondents favored the socialists.