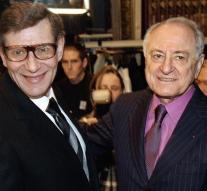 - Pierre Bergé, the former partner of French fashion designer Yves Saint Laurent, died on Friday. That says the French newspaper Le Monde, where he was in the supervisory board. Bergé has become 86 years old.

Bergé, together with his life partner, founded the fashion house mentioned to the designer and held the business leadership for a long time. In addition, he had many functions in the French cultural world. He also set himself up for gay rights.

After the death of Saint Laurent in 2008, Bergé led the sale of the art collection that the two had built together during their life. In October, in Paris and Marrakesh, museums dedicated to Saint Laurent will open, for which Bergé has taken care of.