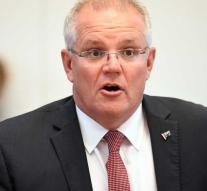 canberra - The largest Australian political parties have been hacked by another country. The Australian Prime Minister Scott Morrison announced this on Monday.

'The hack was done by an advanced group that was acting on behalf of another country,' Morrison says in Australian media. 'There is no evidence that the hackers have mixed in election cases. '