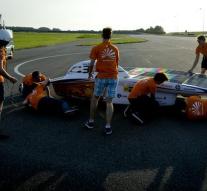 delft - The Delft student team Nuon Solar Team gets a serious backstroke for the pick. Airline companies do not dare to bring their handmade battery to Australia for the race with solar cars next month. This is due to recent accidents with batteries of aircraft on board aircraft.

The Delftse solar car battery is now stuck in Singapore. 'The battery delay is problematic. Without battery, we can not participate in the Bridgestone World Solar Challenge starting on October 8, 'said the student team.

The students have now implemented a plan B: building a new battery on site. For this purpose, parts of batteries from Japan to Australian Darwin are taken. 'With less than a month, participation for the Delft team will be very exciting. '

Delay is not new to Delft students. During the 2013 solar solar event, major problems with wheel suspension caused the team to hardly start. In 2009 the situation was even more dramatic. The sunlight driven race car of the Delftians crashed during a test drive and had to be rebuilt in a week.

The students are determined to participate this time. 'Do not get started is not an option for us,' says one of the participants.