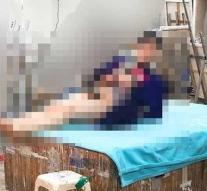 seoul - The police in the Korean capital Seoul has picked up a female nude model because she secretly took a picture of a male colleague and spread it through a feminist forum.

That is what the Korea Herald writes.

The two had met for the first time on the day the photo was taken. They posed for an art class at the Hongik University and were reportedly in conflict about the question of who could use the relaxation room for models.

The woman then took a picture of the man during a model session and sent it to a feminist forum. Other members of the forum delivered vile comments on the body of the male model. And on his mental condition: 'Male nude models are not good at their head. '

The victim feels the Korean Times ugly in his shirt. He does this work part-time and never told his immediate environment that he was getting extra money in this way. When the photo was distributed via the radical feminist website Womad, the man was in tears.

The suspect, a woman of whom only the surname Ahn is known, was initially only a witness in the case, but promoted to suspect when the police discovered that she had thrown away one of her two cell phones. Later it turned out that she- despite a denial- still had ties with Womad.