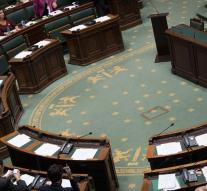 In a short letter to Chamber President Siegfried Bracke (N-VA) Michel writes that he comes to the Chamber ' once the outcome of the negotiations has been reached 'According to Belgian media finds conciliation in crisis However, according to the Christian Democratic party CD \u0026 amp..; V falls ' wants with a little good 'or get out.