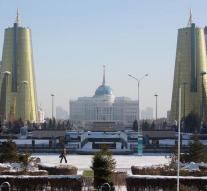 astana - The Kazakh parliament wants to rename the capital Astana for President Nursultan Nazarbayev. According to a clause in the proposal Wednesday unanimously adopted by the two chambers of parliament, the British newspaper The Guardian reported Thursday.

The proposal is about the festivities to mark the 25th anniversary of the country. The last section is the plan to rename the capital.

Ultimately, the decision for the new name to the 76-year-old president himself, who has been in power since 1989 in the former Soviet Republic. At first he was leader of the Communist Party and became the first president after independence in 1991.

The capital has changed often by name. The city was founded in 1830 as Akmoly. which Akmolinsk, in 1961. Two years later, in 1992, Tselinograd and Akmola. The current name, which simply means 'capital' is in vogue since 1998.