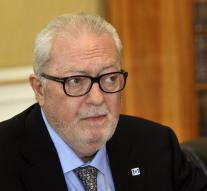 strasbourg - The parliamentary assembly of the Council of Europe has no confidence in her chairman Pedro Agramunt and derives him from his powers. A trip from the Spanish senator in March with a delegation from the Russian parliament to Syrian President Bashar al-Assad, paid by Syria, is not acceptable to parliamentarians.

Agramunt, who previously acknowledged that he was wrong and apologized for the 'private trip', should not be able to make any official visits and statements on behalf of the meeting, so the parliamentary board decided on Friday.

The chairman chose not to attend the board meeting but did not file a resignation letter, according to British Vice-President Roger Gale. He can not be forced to step up according to the rules. The integrity of the parliamentary assembly must be held high, Gale motivated the decision.

47 countries are affiliated with the Council of Europe, which oversees democracy and human rights. The Strasbourg-based organization is separate from the EU.