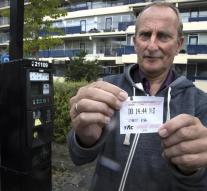 Those arriving by car will encounter increasing costs when visiting inland. Nationally, parking rates have risen 13 percent over the last five years. Assen spends the crown with an inflation of sixty percent for driving the car.

This is evidenced by a research by the Dutch Retail Trade Association, which is currently being presented, for the amounts to be shed in 36 big cities in the parking lot. The interbranch organization speaks of 'irresponsible and incomprehensible municipal policy': 'Good parking policy is the city's business card', according to the industry association.

Assen considers the research one-sided: 'On-street parking is more expensive, but prices in our parking garages are halved. A day ticket costs only 6 euros, which I will not read again. These measures have been taken in close consultation with the entrepreneurs in our inner city, 'says spokeswoman Martin de Bruin.

Other cities that outreach the visiting city visitors are Haarlem (plus 53 percent since 2012), Zaanstad (34 percent) and Rotterdam (33 percent). On average, the maximum hourly rate in the municipalities surveyed has increased by 30 cents in the last five years to 2.61 euros.

Amsterdam remains the most expensive spot to stall the car: for the first hour there must be 5 euros to be ticked. Utrecht and Haarlem are number two and three with forty and eight cents respectively. Whoever wants to be cheap, is best off in the free city of Westland. Heerenveen is advantageous at 1.20 euro per hour, like Hoofddorp (1.35 euro).