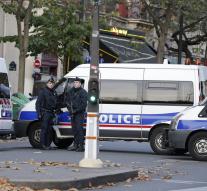 - The schools and buildings of the universities in Ile-de-France continue Saturday in connection with the terrorist attacks all closed. The French Ministry of Education Saturday show include Facebook and Twitter know. Ile- de-France is the region that contains the French capital Paris.

The French educational system still often in classes on Saturday, although in recent years more and more schools abolished. Wednesday, who often was a free day, more and more used instead to provide : education.

The young students are inconvenienced by the series of attacks. All school trips have been deleted throughout France.

All sports events in Paris this weekend also not go through. Fourteen smaller museums that are members of an umbrella organization of museums in the French capital Saturday will not open, so the organization announced on Twitter. Various theaters and concert halls do not open, writes the French newspaper Le Figaro.