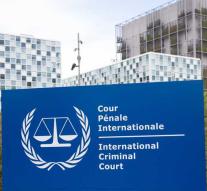 paris - The French government expressly expressed support to the International Criminal Court (ICC). It is a reaction to the threatening language of the American national security adviser John Bolton. He has already declared the court dead.

'France, together with its European partners, supports the International Criminal Court both in paying dues and in cooperation with the court. 'According to a spokesperson for the French Foreign Minister, this should be allowed to carry out his duties unhindered, independent and impartial, in accordance with the principles laid down in the Rome Statute.

This statute is the foundation of the ICC that was formally established in 1998, but actually went to work in The Hague in 2002. Among others, China, Russia and the US do not participate, 123 other countries do.

The US has always been a fierce opponent of the ICC. The Dutch minister Blok (Foreign affairs) said Tuesday that this (Bolton's threats) fits in a line that was previously plotted. The US fears from the outset that the ICC will prosecute US military personnel or drivers for foreign military intervention.

That is why the American law was already amended in 2002. The president was given a special power of attorney 'to use all possible means to secure the release of American personnel imprisoned by or at the request of the International Criminal Court (in The Hague). '

The court is not just under fire in Washington. Participating countries are also complaining that it is almost exclusively focusing on not too startling matters in Africa. And the court has meanwhile, in spite of colossal expenses, only a handful of defendants sentenced.