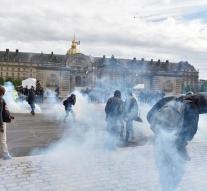 - The unions may not hold protest march in Paris against the government plans to change the Labour Code. The unions wanted to argue again Thursday with a procession from Place de la Bastille to the Place de la Nation, but the head of the police in the French capital that has Wednesday banned, French media said.

The last protest march on June 14 is completely out of hand by rioters and vandals. The police therefore wants the protesters march not keep, but stay in one place as a demonstration has been allowed.

Leftist unions and activists are turning strongly against the law which the government hopes to ease the complicated labor and influence of unions reduces in the drafting of collective agreements. Then more people could get a job. The unions argue that erode workers' rights and should be soon provided more work for less money.