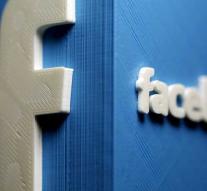 berlin - Facebook has to give the parents of a deceased girl access to her account on the social networking site. A court in Karlsruhe, Germany, ruled that they are entitled to it as survivors.

The parents of the girl want access to the Facebook page in the hope of clarity about the cause of death. The fifteen-year-old teenager ended up in 2012 for a metro in the German capital. It is unclear whether there was suicide.

The court chairman said that letters and diaries are also transferred to heirs. There is no reason to treat digital information differently.