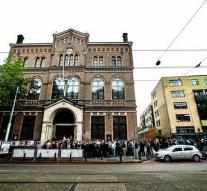 amsterdam - A night spent in Paradiso, it may be this summer. The Amsterdam pop temple has offered on owner's website Airbnb. For 100 euros, two people very Paradiso rent day and night.

The attendant will be on July 31 and 10 and August 15,, transformed into the master bedroom, 'said Jurry Oortwijn Paradiso Tuesday. The idea for the lease arose during a brainstorming session on the 50th anniversary in 2018. Since this summer were a few dates when no concerts are planned, it was decided to keep all the action this year.

Visitors have access to almost all facilities.,, On the ground floor you have a wide choice of toilets. Urinals as well as comfortable sitting on toilet bowls. On the first floor and you have access to 200 boxes '', stands in the ad.


Those interested should write a cover letter, where Paradiso then selects the best entries. Having a party during the stay is not allowed.