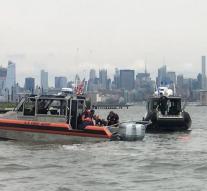 jersey city - An American navy was killed in the Hudson mouth on Sunday when his parachute refused to open during a demonstration. Thousands of people who saw the show from Liberty State Park saw the accident happen, reports American media.

The Navy held demonstrations for an annual festival held around New York Harbor. The victim was taken out of the water by the Coast Guard and taken to the hospital. There he was not extinguished much later.

It is being investigated how the parachute could not be opened.