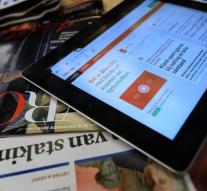 brussels - A digital subscription to a newspaper or magazine has to be significantly cheaper by a reduction in the VAT rate.

The European Commission will do so with a proposal, according to sources in Brussels. The reduction also applies to digital books.

At present it is still true that a digital edition of a newspaper in the Netherlands is covered by the high rate of 21 percent VAT, while for exactly the same, but printed version, a reduced rate of 6 percent.

Netherlands has been fighting for years in Brussels to adapt the rules and now seems finally get his way. The proposal allows the 28 Member States to apply a reduced rate, required it is not. Belgium and France, digital productions showed previously subject to a low or zero rate and were previously reprimanded. Netherlands dared therefore not independent digital newspapers to charge a lower rate.