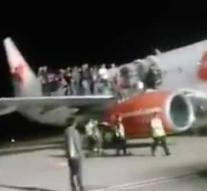 jakarta - Several passengers of an Indonesian plane were injured after a man had made a false bomb alert, Indonesian media reports. At that moment the aircraft was still on the ground in Pontianak, capital of the province of West Kalimantan on the island of Borneo.

The remark about the bomb caused great panic among the passengers, after which people opened the emergency doors and jumped out of the plane. On video images you can see how dozens of passengers are standing on the wing of the plane and falling from it. Others fell from the emergency doors and in their fall hit the engine of the aircraft. The man who did the bomb alert was angry because a stewardess had moved his bag.

Earlier this week, another man was removed from an aircraft of the same airline, because he had told his fellow passengers that there was a bomb on board. Both men can receive a one-year prison sentence for distributing information that endangers safety while flying.