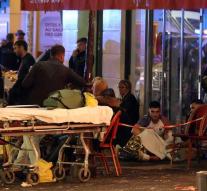 nice - A shot with an alarm pistol in a pedestrian zone has caused panic in the southern French city of Nice. A dozen people were therefore slightly injured.

According to Mayor Christian Estrosi, someone used the gun during an argument. The attack in July 2016 is still fresh in the memory of the inhabitants of Nice. At that time 84 people were killed.

According to the regional newspaper Nice Matin, the crowds of the alarm pistol caused a crowd of people to move on Monday night and many were overrun.

According to the police, at least ten people were injured, the newspaper reported. nine of them had to go to the hospital. The police reported on Twitter that the person in charge had been arrested.