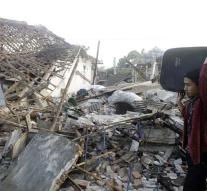 jakarta - The Indonesian island of Lombok has once again been startled by a powerful earthquake. According to the first reports, it had a force of 6.2. Witnesses say that a number of buildings have collapsed. People ran out into the street in panic.

The island was already hit on Sunday by an earthquake with a force of 6.9, which was followed by a series of aftershocks. The emergency response service says that at least 168 people were killed by the natural violence. Thousands of buildings have collapsed or have suffered damage.