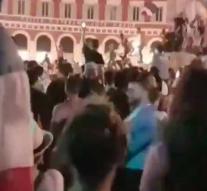 nice - At least 30 people were wounded Wednesday night in the French city of Nice during the quarter finals of the WC between France and Belgium. Dozens of people fled when pops were heard. The sounds, however, appeared to come from firecrackers that were chipped in the middle of the mass.

Two years ago, 86 people were killed in a terrorist attack in Nice when a truck hit the boulevard. With that attack still fresh in the memory of the inhabitants, hundreds of people put it on a walk when there were popping.

The panic broke out just before the whistle. Probably about a thousand football fans, who had gathered on a square in the city, tried to get away as quickly as possible. In all turmoil, countless people went over.

A few minutes later, when the havoc was already enormous, it became clear that there was no danger: the explosions turned out to have been caused by firecrackers who had 'a football fan' in the middle of the square to 'celebrate' the profits of the French. In the meantime the emergency services had been massively pulled out. Six ambulances and fifty firefighters arrived on the spot. The wounded, who had often suffered abrasions or cuts, were treated on the spot.

Eyewitness Stephane, who sat on a terrace nearby, told French media how he suddenly saw hundreds of people running his way. 'They looked terrified. '