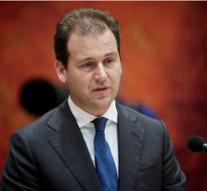 panama - It broadened and deepened Panama Canal is Sunday officially inaugurated. In the presence of Heads of Government and Ministers Panama opens the channel between the Pacific and the Atlantic. On behalf of the Netherlands Deputy Prime Minister Lodewijk Asscher present.

Last year 960 million cubic meters of cargo transported through the canal, a record. The widening is 1.7 billion cubic meters annually freight from the Atlantic to the Pacific to sail, or vice versa. The huge ships in the old channel could carry up to 5,000 shipping containers bear the new so-called Panamaxes to 13 000 containers.

The widening and deepening of the channel has worked since 2007. The Dutch engineering company IV-Groep designed the doors of the new locks.