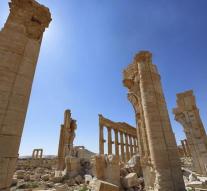 palmyra - IS fighters have before they withdrew from Palmyra buried thousands of mines. They were planning to let go off at the same time when the Syrian army invaded the city. Has told a Syrian officer in the city of antiquity.

The mines, with up to 50 kilograms of explosives in it, were posted on the main roads and side streets and were linked together so that they could go off at the same time. The Syrian army had already more than 3,000 verified explode since it recaptured the city Sunday. Why the IS fighters did not let the bombs explode, the officer did not tell.