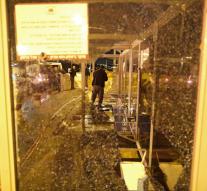 jerusalem - Two Palestinians were slain Tuesday when they attacked an Israeli soldier in the West Bank. The soldier was under the army stab wounds.

The Palestinians would have ceased suspiciously near a Jewish settlement. When military claims the duo, one of the soldiers was stabbed. The Palestinians were shot it. The men were, according to family members 17 and 22 years old.

It has long been restless in Israel. Since the beginning of October, at least 58 Palestinians slain in attacks or demonstrations. On the Israeli side are definitely eleven deaths.