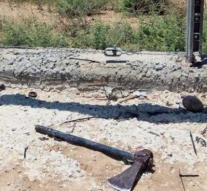 jerusalem - The Israeli army has shot a Palestinian man who, armed with an ax, tried to cross the border. Another man fled after they had damaged the fences at the border.

It has been very restless for some time at the border. This weekend, the Israeli Air Force attacked Hamas targets after Egypt and Palestinian authorities called for a truce last week. On Saturday morning missiles were launched from the Gaza Strip. On Sunday, fire was erected by Palestinians in several places along the border.