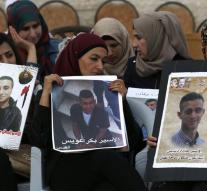 jerusalem - Hundreds of Palestinian prisoners in Israeli prisons ended their hunger strike on Saturday after forty days. That reports the Israeli prison service.

Over eight hundred prisoners stopped the hunger strike that began on April 17. They protested against the bad conditions in their prisons in Israel. Following negotiations between the Israeli prison authorities, the International Red Cross and the Palestinian Authority agreed that Israel would meet the prisoners on some points.

Details of the agreement have not yet been published.