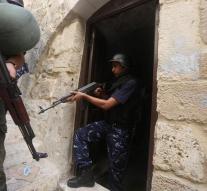 nablus - Palestinian police have in a prison in Nablus a prisoner beaten to death allegedly responsible for the deaths of two of their colleagues.

That informed the governor of Nablus and the spokesman for the Palestinian security forces Tuesday. They promised an investigation and punishment of those responsible.

Ahmed Halaweh was arrested Monday night. He would have argued a group of men who last Thursday during a raid against criminals in Nablus two agents killed in a firefight. During the chase two criminals were slain on the perpetrators.


In the autonomous Palestinian towns on the West Bank, the Palestinian police in accordance with the peace agreements with Israel responsible for the security. This prevented the Israeli army not to perform regular searches and arrests in the area.