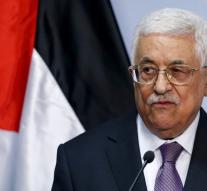 - Palestinian President Mahmoud Abbas on Thursday in a private meeting with MPs condemned the violence on the Palestinian and Israeli sides. That MPs declared after the meeting.

" For us it was important that he distanced himself very clearly at the beginning of the violence as we see today in Israel and also condemned ", said Michiel Servaes of the PvdA. According VVD MP Han ten Broeke is urged him to violence " also condemn in-house ".

The Chamber Building demonstrating in the morning a few hundred supporters of Israel. The demonstration was organized by CIDI and Christians for Israel.