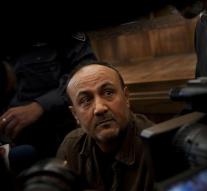 jerusalem - The captain of Palestinian detainees who had been in hunger strike in Israeli prisons has been filmed secretly while he was eating in his cell. Sources within the Israeli prison service say to the newspaper Haaretz that Marwan Barghouti has been in a trap.

Palestinian detainees have been in hunger strike for about a month to enforce better conditions. According to The Times or Israel, it is unclear how many people participate in the action. According to Israel, there are about eight hundred prisoners; Palestinian sources speak about 1500 hunger strikes.

Images released by Israel reveal that Barghouti, who was sentenced to life, is not so close to the action. On the video images, which appear to be from a hidden camera, you can see how he eats biscuits and a candy bar in his cell.

The sources said that Barghouti was trapped in a list. They wanted to see if he really wanted to keep the hunger strike. The Palestinian lawyer complained that the prison system was conducting a 'psychological and media war' against prisoners. The authenticity of the images has not yet been established.

It would be about the images below.