Home / World / Palestine envoy should not go to Palestine 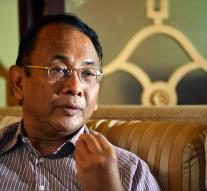 geneve - The UN envoy leaves Palestine, because he was not allowed to travel to Palestine. The United Nations announced Monday it. The Indonesian Makarim Wibisono was in function since June 2014, but Israel has not permitted him still to the West Bank and Gaza Strip.

Wibisono said he Israel repeatedly has requested access. I started this with the assumption that Israel would grant me access as impartial and objective observer , he said. Unfortunately, my efforts to improve the lives of Palestinian victims of violations under the Israeli occupation, every step opposed. According Wibisono the Palestinian authorities have cooperated with his requests.