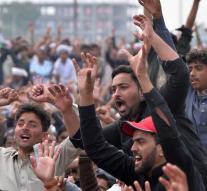 islamabad - Also on Friday, radical Muslims took to the streets in Pakistan to protest against the release of Asia Bibi. The protesters are fierce because the Christian woman was acquitted of blasphemy by the Supreme Court on Wednesday.

Talks between the government and the radical Islamic group Tehreek-e-Labaik Pakistan (TLP) to calm the situation have failed Thursday night. 'We will not withdraw until the judges who have destroyed the death sentence are laid off and Bibi is hanged,' said TLP leader Khadim Rizvi Friday in the northeastern metropolis of Lahore.