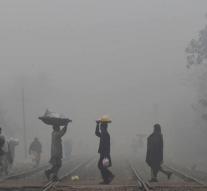 lahore - The populous Punjab province in Pakistan on Tuesday all schools closed for five days and at 22.5 million pupils and students said they should stay home. The reason for the closure is the cold, leaving many children contract the flu or pneumonia, said Education Minister Rana Khan Tuesday. Temperatures in the capital Lahore have fallen to just above zero, while many schools do not have enough fuel to heat the premises.

Khan denied that the closure of the 100 000 schools has to do with the threat of militants, who were planning to commit its attacks on educational institutions.

Taliban attacked a school in December 2014, killing 134 children. Punjab then closed the school for two months.