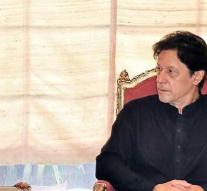 islamabad - The Pakistani government has sold over sixty cars by auction. Among other things luxury and bulletproof vehicles were put under the hammer. The new Prime Minister Imran Khan wants to tighten the belt with such actions, but is himself under fire because he regularly flies to his work with a helicopter.

The auction yielded the state treasury more than 1.2 million euros, reported television channel Geo TV. The government tried to sell more than a hundred cars, but that did not work in all cases. For example, no new owners have been found for two vehicles designed to withstand bomb explosions.

The former cricket idol Khan acted as prime minister last month. He promised to let a fresh wind blow. Critics, however, mock the helicopter trips of the prime minister, who often transported to the capital Islamabad by air. According to his government, that costs 34 cents per kilometer, but that calculation is not taken seriously by everyone.

'Why do not you buy the metro and bus lines? Then you can let the people take advantage of cheap helicopter trips as an alternative ', a television presenter joked.