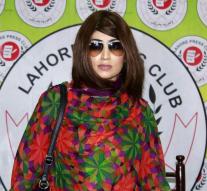 lahore - Qandeel Baloch, a Pakistani woman who tried to stretch the strict morals in her country with spicy photos and videos on social media, was strangled by her brother. He probably did that to cleanse the honor of her family. This has informed the police of Punjab.

Baloch, who was called in real Fauzia Azeem, was strangled by her brother Waseem in her bedroom in the family house in the city of Multan, then her father called the police.,, It seems to be about honor killings, but further research should reveal what was the motive for this murder. '' The police are looking for Waseem, who has disappeared.

In Pakistan, each year more than five hundred victims of honor crimes. They are often killed by their own families, to shame inflicted to erase the community.