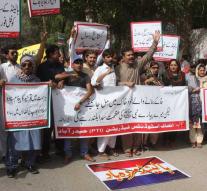 islamabad - The protest march in Pakistan against Geert Wilders' cartoon contest was called off on Thursday, shortly after the Dutch MP broke down his plans. The extreme Muslim party Tehreek-i-Labbaik Pakistan (TLP) organized the march from the city of Lahore to capital Islamabad.

The party wanted out of anger about Wilders' plans, among other things, that Pakistan would break diplomatic ties with the Netherlands. The march started on Wednesday and several thousand Muslims participated. The protest march was Thursday in the neighborhood of Islamabad.