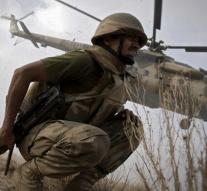 - Pakistan Friday re-tested a missile which can be equipped with a nuclear charge. The test with the missile of the type Shaheen- III was a success, the army said.

Two days previously had to resume the foreign ministers of the nuclear powers India and Pakistan have agreed to peace talks. Which were suspended after the attack in 2008 in Mumbai, India, where 166 people were killed.