Home / World / Pakistan angry with the Netherlands for Wilders 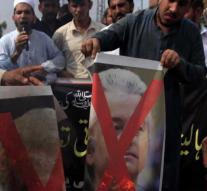 islamabad - Pakistan has called the envoy of the Netherlands on the carpet. The country is angry about a cartoon contest of PVV leader Geert Wilders. 'Deep concern has been conveyed about this willful and malicious attempt to put Islam in a bad light,' said the Ministry of Foreign Affairs in Islamabad.

Pakistan speaks of a 'terrible and shameful plan. 'The Pakistani ambassador in The Hague has been instructed to address this as well. Pakistan wants help from other Islamic countries. In addition, Pakistan wants to bring it to the attention of the United Nations.