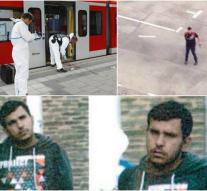 - Germany had to do more often in the past year with terrorist violence. A brief overview.

November 26, 2016- A 12-year-old German of Iraqi descent puts a nail bomb in front of the town hall in Ludwigshafen. Earlier, he had tried the same thing at a Christmas market in the same town. The explosive does not fire.

October 11, 2016- The fugitive terrorist Jaber al-Bakr was arrested in Leipzig with the help of two Syrian asylum seekers. Al-Bakr himself later hanging in his cell.

July 24, 2016- A rejected asylum seeker commits a suicide attack at a music festival in Ansbach. Twelve people are injured. On the same day killed a Syrian with a machete wielding a pregnant woman in Reutlingen. The 21-year-old offender wounding two people before he himself was run over by a car.

July 22, 2016- The 18-year-old Ali David Sonboly hits in a McDonalds restaurant in Munich nine people dead. The boy, of German-Iranian descent, is an admirer of the Norwegian mass murderer Anders Breivik.

July 18, 2016- An Afghan refugee falls into the train with an ax travelers, under the cries of 'Allahu Akbar.' Five people injured. The police shooting of 17-year-old attacker dead. In his room found an IS flag. The attacker was two years ago as unaccompanied young asylum seekers arrived in Germany.\n  \n  \n   advertisement

May 10, 2016- A man armed with a knife falls train passengers while shouting Islamic slogans at the station in the Bavarian Grafing. There's a dead man.

February 26, 2016- A 15-year-old girl sticking a policeman down in Hanover. She says she is inspired by Islamic State.

February 4 2016- Hundreds of officers conduct several raids in search of a group of four IS terrorists. Two men held in North Rhine-Westphalia and a man is arrested in Germany.

December 21, 2015- Munich train station is cleared on New Year's Eve because of an acute terrorist threat. '