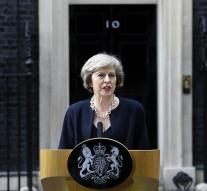 london - The brand new British prime minister Theresa May has since taking office completed the most important ministerial posts. Below an overview. Except themselves still take six women in the British cabinet meeting.

- Boris Johnson (52), Minister of Foreign Affairs. The former mayor of London and Brexit-advocate himself was in the race to succeed Cameron, but dropped out.


- Amber Rudd (52), Home Affairs, the post that May himself occupied for six years. Under the previous prime minister, she was Minister for Energy and Climate Affairs. Rudd gets to make that appointment with immigration matters.

- Liam Fox (54), International Trade. He was a contender for the leadership of the Conservative Party, but soon fell off in the first round of voting.


- David Davis (67) is charged with a single ministerial post for the departure of Britain from the European Union.

- Justine Greening (47), Minister of Education. She is a former Minister for Development Cooperation.

- Chris Grayling (54), Minister of Transport. In 2012 he succeeded Kenneth Clarke as Justice Minister.

- Andrea Leadsom (53), the conservative candidate for prime minister who stepped at the last minute out of the race, is the new Minister of the Environment.

- Sajid Javid (46), Minister for Minorities and Local Authorities. He had the Department of Business and Innovation under his wing.

- James Brokenshire (48), the Ministry gets Northern Ireland under his wing

- Karen Bradley (46), the minister of Culture, Media and Sport. Under Cameron she was Minister of Abuse Prevention, Operations and Crime

- Priti Patel (44th), International Development takes under her wing. She was Minister for Employment

- Damian Green (60), the Minister is of Work and Pensions

The Ministry of Health has no name yet known, reports the British government website.