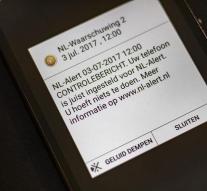 the hague - About 9.2 million people have received the NL-Alert check-in from two weeks ago. In total, even 10.8 million people aged 12 years and older are reached, as well as those counted on, for example, from friends and colleagues.

This is shown in a sample, the results of which were announced on Tuesday by the National Coordinator for Terrorism and Security (NCTV). NL-Alert is the system with which the government alerts people and informs them in case of a disaster. The control message is sent every six months so people can see if their mobile phone is set up properly.

The NL-Alert check report last December was received by approximately 8.8 million people from twelve years of age directly. The next test is Monday 4 December.