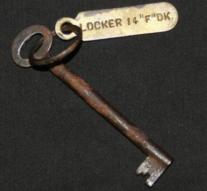 london - The key of a closet that was used on the Titanic by a steward sold for 85,000 pounds (about 95,000 euros). According to the British auction house Henry Aldridge \u0026 Son belonged rusty object, according to the label fit to box 14 on the F-deck, to the then 23-year-old Englishman Sidney Sedunary. He worked in the third class of the famous ship that sank on its way to New York on April 15, 1912 after a collision with an iceberg.

The disaster 1500 people were killed, including Sedunary. His body could not be recovered and identified. The key that he had with him, was sent to his widow and remained in the possession of the family until the auction on Saturday. There, hundreds of items from the Titanic crew came under the hammer. Letters from crew members were highly sought after, they brought tens of thousands of euros.