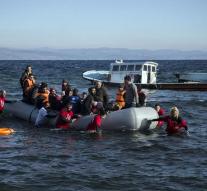 geneve - More than 800,000 refugees have so far this year came by sea to Europe. That's about four times as many as in 2014, according to the International Organization for Migration (IOM) Tuesday.

In November, there were the refugee agency UNHCR, the United Nations about 140 000 displaced persons who are often in rickety boats across the Mediterranean traveled to Europe. That was a lot less than the 220 ​​000 in October. According to UNHCR, the decrease was dictated by the weather conditions and measures against human trafficking by the Turkish authorities.